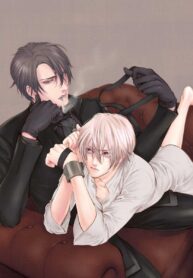 Noah, an orphan with a rebellious attitude, is deceived by a friend and put up for auction. Gilbert, the person who bought him for 200 million was rumored to be a ruthless man. Noah was prepared to be treated badly, but during his first sexual encounter, he was taught pleasure he had never felt before.

“I should have wanted to escape, but I was gradually moved by the clumsy kindness of Gilbert and the reason why he bought me.”