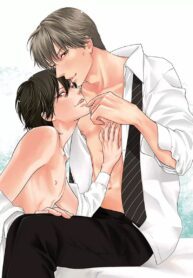 N/A, it has 2 monthly views

In the Between the Sheets series:

V.1 – Between the Sheets

Ichise finds himself lost and somewhere he doesn’t know. Later, he finds a bar that has an amazing bartender, Takafumi. Ichise falls in love with Takafumi at first sight, but Takafumi has his own rule that he will never go out with his customers. One day, Ichise tries to ask Takafumi out again and suddenly Takafumi says “yes”!?

“Here as well as here, here and here … Are there all mine?”

Ichise is a hotel president has begun to overflow with too sweet words of love for his partner Takafumi. In contrast to the high-tech Ichise, Takafumi has a high difference in values. But what happens when Takafumi’s boss asks him to hire his younger brother? Filled with husband-ly complaints and sweet talk, follow this sweet love until the end!