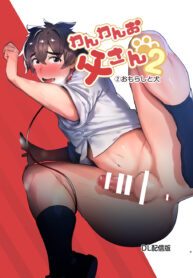 Inubo’s a hard working single dad who makes constant blunders at work. With one chance left to prove his worth, he’s gonna have to go the extra mile.

Note:
Has a Prequel Spin-Off titled Puppy Play With Papa – What the Cat Dragged In with currently 5 chapters, which are also combine with Puppy Play with Papa pixiv chapter list

Part 1
Inubo’s a hardworking dad doing his best to make his son proud, but he makes constant blunders at his job and his timid personality leads to him getting walked all over. When his boss puts the pressure on him to make a big sale with a client, Inubo’s associate – a steely-eyed, cutthroat salesman named Nekoyanagi – wants to find out just how far he’s willing to go to close a deal.

Part 2
Toge Inubo, at Nekoyanagi’s firm suggestion, has been keeping up his “arrangement” with the deep-pocketed director at the Asakusa Clinic. However, Inubo is troubled by his blooming crush on his cold and distant coworker. Just as he laments being basically chopped liver in the eyes of his mentor, he receives a dinner invitation from Nekoyanagi – could the interest be reciprocal!? Inubo’s so hot under the collar that he forgets all about the ACTUAL collar dangling around his neck…

Part 3
Inubo and Nekoyanagi’s budding love is in jeopardy after Inubo stumbles into an encounter between Nekoyanagi and his stepfather. While Nekoyanagi gets goaded into doling out more punishment to his masochistic stepdad, Inubo is persuaded into trying out new toys at the doctor’s, and both find themselves plagued by doubts…

Part 4
Stressed out from the doctor’s continuous demands, Inubo takes a vacation from work to spend quality time with his son. This worries Nekoyanagi, who speeds off to the countryside to see him in person. Inubo is taken aback by the gesture, and starts to wonder… is Nekoyanagi ready to commit!? Oh, and there’s loads of steamy sex too.

Part 5
Inubo and Nekoyanagi are discovering the joys of cohabitation, and the latter is starting to see the former as more than just a boytoy – even hinting that he ought to quit his job and become a stay-at-home partner. Nekoyanagi decides there’s no better time to cut things off with his toxic family, but Tatsuki isn’t going to take that sitting down. When he storms into his stepson’s abode at the wrong time…

Part 6
As per usual, Inubo can’t catch a break. If it weren’t enough that his job search is leading him nowhere, he can’t even make it home from an interview without being creeped on by a pervert. Meanwhile, Nekoyanagi visits his mother to settle his family affairs once and for all, but ends up receiving some startling news.

Part 7 – Series finale!
After receiving unwelcome news from his mother, Nekoyanagi’s been down in the dumps. This is leaving Inubo pent-up and frustrated, especially since his partner’s pride won’t let him tell him what’s wrong. To try and cheer him up, Inubo drags Nekoyanagi on a trip to Chiba, prompting both men to think hard about what family means to them.

A Kiss for You, My Shinobi