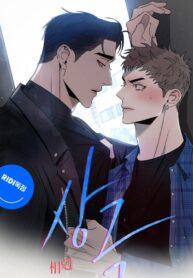 Kwon Euntak , gay & his stype has always been pretty guys smaller than him … that is until he met Lee Dojae, when he met to basket ball court to play with the business department …since the beginning he was conscious of Lee Dojae who was far from his type..he even asked the redhead who Lee dojae was .. His friend shouts & lee Dojae also catched a glimpse of him …After the game Kwon Euntak was unconsciously following him everywhere ..soon they met at the group dinner & Lee asked Kwon Euntak – hyung do u want to sleep with me, hyung do you like me ,u are so obvious who doesn’t know , i didn’t think you were trying to hide it ..Lee said if Kwon Euntak likes him then he must be gay & he wants to try out what sleeping with a guy feels like..

The Line Between Love and a Deal

Love Due to Conscious Neglect 2 Dilemma of a Madman