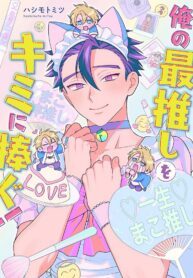 Chihiro, a freeter, went into a crossdressing maid cafe as the penalty to a punishment game. The maid serving him was a tall, buff, scary-faced dude, Mako!! Though Chihiro was surprised when a maid who was completely different from his imagination stepped in, Mako’s angelic smile made him melt in a heartbeat. Just like that, he quickly dived into wota life being Mako’s hardcore fan!! Thanks to all his efforts, they developed mutual feelings… but Mako’s workplace forbids dating!! Now these two lovebirds have to keep their romance a secret in the cafe–?! Chihiro’s Super Duper Ultra Happy “He’s got muscles and is tall, but that’s what makes him!! The cutest thing!! Ever!!!” world revolving around Mako will melt weary heart in the wink of an eye?