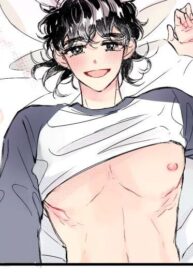 The two beauty’s on campus Arang and Hanse.

The two, who accidentally bumped into each other, have one night stand in a drunken mood, but Arang feels awkward and avoids Hanse after that day. Hanse, who was displeased with the feeling of being eaten and then running away, begins to bully Arang with revenge when he encounters Arang in class. Arang, who was stressed by the quarrel with Hanse, suddenly collapsed and was taken to the hospital, and heard news like a bolt from the blue…

The dad is Hanse?! Officials begin to flock for research at the news of male pregnancy, and Arang and Hanse, the subjects of the study, start living together semi-forcedly.

Eye Encounter With the Deer