Even if it’s Not Fate 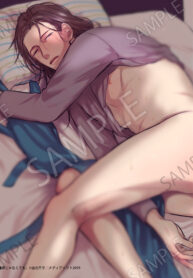 Some things are inexplicable, even if it’s not fate. “Even If It’s Not Fate”: Koharu is a regular beta in college. His recent goal is to get a car, which is why he’s been helping out his family in delivering packages. One of the households Koharu regularly delivers to is Mr. Ubukata’s, even though he never seems home. Will Koharu ever find out what Mr. Ubukata is hiding? “Profanity Encounter”: Shimoga and Naiya are loan sharks for Asato Finance. They hit up borrower’s houses and “ask” for their money. One such borrower is Mr. Hisayama, but as luck would have it, Shimoga and Naiya find him murdered in his home. The two loan sharks now have to track down Mr. Hisayama’s guarantor to collect their money… but that’s not all they got.

When The Yakuza Falls In Love