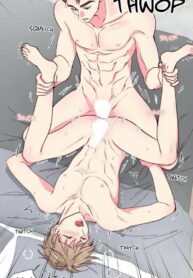 370 million Won has been loaded into a van that Jung gets into. The driver informs him there is no receiver today so they are going to do a 2-to-1 transaction. The driver and Jung notice the dump truck behind them appear closer before it crashes into them. Jung gains consciousness in a room and hears the breaking report on the news that the driver of the dump truck stole the money and transferred it to another vehicle driven by an accomplice. Allegedly the cash was stolen to begin with. Jung awakens to see Uhm and Pyo Seungyoon. The latter asked his guys to search the vehicle carefully but Jung was the only one left on the scene. He adds interestingly the air bag only popped up on the passenger seat that Jung was in. While Jung is unresponsive his stomach growls. Pyo has Uhm bring a box to the table which contains a strawberry cream custard. Jung does eat it then sets about licking Pyo’s fingers

In the Private Room

My Demon Boss Gokudera Wants To Be Exposed