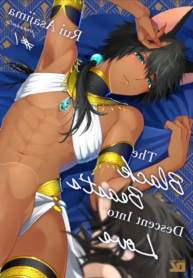 When thief Karim sneaks into a clandestine auction, he finds Asena, a beautiful young man with animal ears and a tail.
On impulse, Karim steals him from the bidder who bought him for a hefty sum and decides to take responsibility, making arrangements to live with him for a month while he waits for the ship to his hometown to arrive.
Asena is high-minded and fiercely proud of his own race, so he treats Karim – a human being – coldly, but one day he suddenly changes like he was a different person and tries to seduce Karim. Asena’s race has the sexual characteristic of going on heat.
Aroused by Asena’s irresistible instinct, Karim makes love to him wildly, but…?!
An oriental fantasy love story swaying between instinct and affection!

A Sleeping Man and a Loving Man