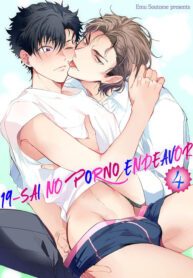 Since the first day that they met, they got involved in intercrural sex and Shidou even utilized it to produce a story which got him a new serialization!

“Be my assistant and cooperate with me to produce the story, perverted brat.”

This book contains not just the series with the title, but also a one-shot which starts with witnessing a long-time rival friend’s sexual scene and includes a peeping tom kink.

Do Not Understand Fucking Cutie